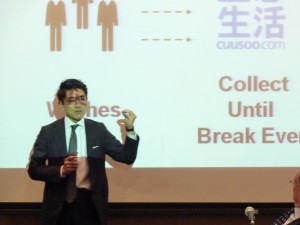 Last night I attended a symposium on Entrepreneurship in Japan (日本の企業家精神; nihon no kigyouka seishin) hosted by the Columbia Business School’s Center on Japanese Economy and Business.  The three panelists (two present, one via video from Tokyo) represented a variety of generations and backgrounds.  In 1985, American-born Ernest Matsuo Higa revolutionized Japanese home pizza delivery after obtaining the exclusive license to Domino’s Pizza.  Atsushi Imuta (participating from Tokyo) quit his job at a Japanese bank to found RISA Partners, an invesment banking firm.  Kohei Nishiyama, the youngest of the group who was raised in Columbia and went to university in Japan, invented the Design To Order system which allows manufacturers to reduce risk by carrying out product development based on customers’ requests.

An article on Japanese entrepreneurship in last month’s Eurobiz Japan highlights how within the Japan’s educational system there is the idea of entrepreneurship and risk-taking being undesirable, and that in order for things to change education needs to be used as tool advocating entrepreneurship.   Higa expressed that the climate for entrepreneurs was improving, perhaps as a side effect of the economic recession.  Before the best and brightest would have automatically entered the top companies, but now that this option is not always available, many have no choice but to become entrepreneurs.  But rather than a default option, the next generation needs to hear the message that starting something new is cool and making money as an entrepreneur, something often criticized in Japan, is not a bad thing.

According to Higa, all entrepreneurs in Japan are mavericks as they are pursuing something uncertain that is high risk and low return.  One reason is the government’s pro-establishment stance, which includes high personal income and inheritance taxes which are a disincentive for entrepreneurs. Also in terms of social status, even someone who is a successful entrepreneur receives less acclaim than someone who took the traditional path and entered a large company.  Whereas in the U.S. we might support the underdog, in Japan they tend to side with stability.  Also, whereas here failure can be seen as a badge of honor before you dust yourself off and try again, in Japan it has more negative associations.

Risk aversion also factors into the financing of entrepreneurs.  In Japan there is lack of a venture capitalist network, hindering access to sophisticated investors.  You can get loans from banks if you have collateral, but they tend to shy away from taking a chance on something different.  Nishiyama (pictured above, courtesy of John Ellis-Guardiola) detailed how he had to get his start-up money came from angel investors based in the U.S. or those who had spent a significant amount of time in the U.S.

Imuta emphasized the importance of spreading the culture of entrepreneurship in Japan, namely the fact that it’s fun to start something new and manage a company and its risks.  He recalled that when he quit his job at the bank, 10% of the people admired him but 70% were suspicious of why he did, thinking he was involved with embezzlement or other illegal activity.

Clearly, in order to further cultivate Japan’s budding entrepreneurs societal and regulatory changes are necessary.  This is occurring on an incremental basis, as evidenced by the appearance last fall of the Japan Times column The Wisdom of Entrepreneurs, which profiles up and coming entrepreneurs .   At Columbia Business School, entrepreneurship is the most popular track for students, and getting the Japanese as passionate about this concept could go a long way in exploiting the country’s latent entrepreneur culture. 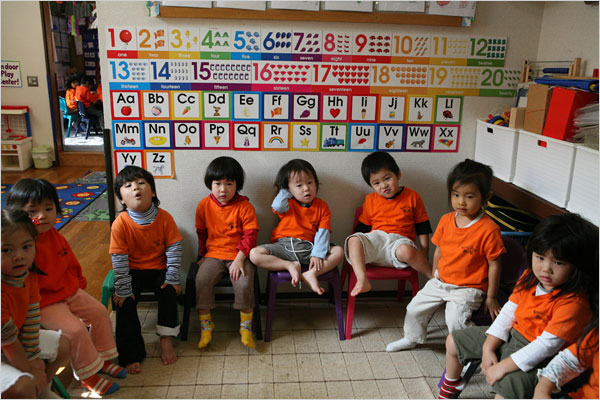 The Japanese economy has had some bad news in past weeks. The index that measures new housing starts in Japan went down 27.1% in October. The historic news that JAL is lowering their retirement payouts still rocks the news, along with institutions posting historic unbalanced budgets, including JTB and the Bank of Japan.

Asahi Prime Minister Hatoyama exclaims “We must do something quickly” The Prime Minister, in an interview with the Asahi newspaper, answered questions about the Dubai economic summit he recently attended. When asked about the weakening stock market and the strengthening yen, he responded by talking about the weak dollar and its effects: “I’ve held meetings previously in Japan about this, but basically my thoughts have not changed. There’s been a strong movement of buying another currency in the face of the weakening dollar; in fact I think only the yen has really experienced such strong appreciation. Something must be done quickly in order to keep Japan the second strongest economy in the world.”

Nikkei “From the first Itoyokado starts its 20-50% off sale” In light of the strengthening yen, Itoyokado from December 1st to December 3rd has decided to drop its prices 20-50%. According to the Nikkei, because the Yen’s getting stronger, Itoyokado anticipates that they can buy groceries such as fruit and pork at a lower price.

Yomiuri “Stock Market and Strengthening Yen Policy Announced” Prime Minister Hatoyama announced a plan to combat a volatile market on September 29th, according to the Yomiuri. Just like the Asahi the Yomiuri also mentioned the prime minister’s concern about rising stock prices and a falling yen, but they noted the specifics of how the plan will combat these two things has yet to be determined.

Background: With America still recovering from the worst job numbers in recent memory, Economists are still pondering the question is the economic recession bottoming out, or continuing to get worse? Although there are some signs from America the economy’s taking off like housing sales up and mortgage rates now climbing, overall the picture is still unclear.

Japan’s economic news today offered hopes that perhaps the world’s second largest economy is showing signs of economic recovery. Despite the comparatively strong yen (it’s been hovering close to 90 yen to the dollar) which hurts Japanese exports, the Monthly Economic Report published by the Japanese authorities today had positive comments on the economy. Each newspaper told a different story on the economic climate.

The report stated that along with an increase in corporate production and exports, personal consumption is also showing signs of recovery. The Yomiuri points to the government’s stimulus package that has encouraged spending on personal products such as televisions and cars that has helped revise the economic outlook upward.

Nikkei “The Monthly Economic Outlook Revised Upward 3rd Month in a Row, Consumption Takes Off” The Nikkei actually tells the full quote from the Economics Minister, stating “Although we’re in a tough economic climate, at this time the economy looks like it might recover.” The last time the economic outlook had been revised upward three times was 7 years ago, after the IT bubble in 2002.

However the Nikkei also pointed out that the economics minister used words of caution. “Although we have this analysis, there is still risk involved in the economy. The movements of the stock market and the exchange rate have been neurotic.”

Asahi “The stock market dips for the 9th time in a row” After searching the Asahi’s site I was surprised to not find anything about the Monthly Economic Report. It was instead filled with political articles about how the vote of no confidence was going to happen earlier, and that Google was now going to publish Japanese political commentary on their site “You Tube.” It seems as if the Asahi is publishing articles showing “political change”, and the possibility of the DPJ beating Prime Minister Aso and the LDP in the next election.

Maybe the reason the Monthly Economic Report wasn’t included was that it was positive, and the Asahi was looking to publish negative economic news to support their theme of “political change.”

The news articles this morning had conflicting stories of how the Japanese are being affected by the economic downturn. The Asahi ran a miraculous headline stating “record catches of black tuna found in Ishikawa Prefecture.” They also stated, although not in a headline, that the Nikkei average had bounced back over the past couple days.

Despite some exceptions, the headlines this morning each told of a different part of the economy sputtering. Looks like in Japanese economic news, what still catches reader’s eyes follows the old saying “if it bleeds it leads.”

Despite these dire numbers, the Yomiuri adds that although the number of bankruptcies continues to go up, they’re increasing at a slower pace. In April, there was 15.4% more bankruptcies than March. The rate of bankruptcies is going down, they claim, due to the government’s rescue package and stimulus that tries to decrease the amount of bankruptcies.

Asahi ”Workers are More Depressed” The Asahi reported that stress from overwork in 2008 was the highest it’s ever been, with 269 cases diagnosed. Within these numbers, 66 were reported to commit suicide, which is the second highest number on record. The report said that the work environment is getting more intense.

When the companies let people go, the employees that are left behind have more responsibility, and more work hours. The report concluded that 60% of the people diagnosed with stress from work worked over 100 hours a week! The people who worked over 160 hours a week, only 24 responded they had stress related symptoms from overwork.

Nikkei “World Economic Slowdown is the Worst Ever” The Nikkei not only focused on dire Japanese news but also highlighted that the world economy as a whole is slowing down. They quoted the report put out by the OECD that measures the economic growth rate of developed nations that includes Europe, the U.S., and Japan. From January to March of 2009, they estimated that combined GDP fell 2.1%, the lowest on record since the measurements began, in 1980.

All across the nation local governments are calling the national government to figure out what to do with construction projects where the funds have frozen. The transportation minister made a speech stating that due to “economic concerns” certain projects have had to be cancelled. In response a local governor stated “I don’t think we should be stopping construction projects due to economic concerns. Safety should be our #1 concern. “

Word of the day