We are rapidly coming up on the deadline for the 国勢調査 (kokusei chousa) or national census, so I hope everyone has already filled in and returned their forms.  Every morning during the Japanese news there are advertisements running in Japanese advocating participation in the census as one’s civic duty.  Also, I have come across some interesting Japanese language print ads that I would like to share. 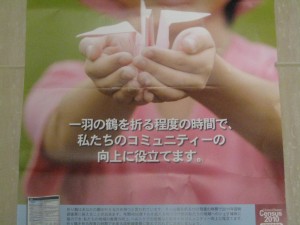 The one on the right shows a young girl holding an origami crane, and the accompanying text reads: “You can help improve our community in the time it takes to fold one paper crane.”  The 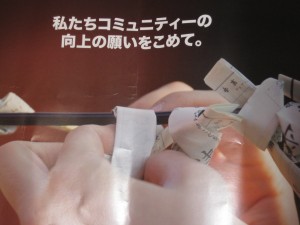 one on the left shows someone of an unidentified gender tying おみくじ (omikuji).  These are the ubiquitous fortunes of various degrees of luck found at Japanese shrines.  It is said that if you are happy with your fortune you can take it home with you, but if not that it is better to tie it to a tree or rope at the shrine in order to avoid having it come true.  This poster’s slogan translates as: “Hope for the improvement of our community.”

I haven’t been paying close attention to census advertising targeting other ethnic groups (or average Americans for that matter), but the cultural specificity of these posters really struck me.  Not only do their images grab your attention, but they tug at your heartstrings as well by providing a cultural touchstone.  Even for me who is non-Japanese but who has spent significant time in Japan, they conveyed a strong message and seem to be a smart way to appeal to Japanese to pick up their pens and be counted.