The Wall Street Journal had some interesting Japan coverage this week.  One article from earlier in the week discusses tactics being employed to get the Japanese populace turned on to fish again, as its popularity has declined d 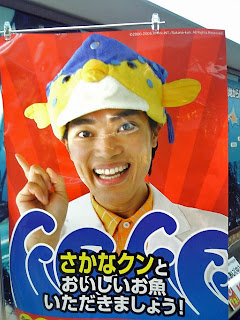 ue to factors such as smell, price and preparation.  It has gotten to the point where fishery officials have started sending instructors to schools in order to teach children how to eat fish with chopsticks, and fish is being promoted in pop culture by characters such as Sakana-kun (on right saying “Let’s eat delicious fish with Sakana-kun!”).

Another article focuses on Japanese-Americans who were interned during WWII, and how they got through this ordeal by forming swing bands.  This legacy is being preserved through a tribute band called Minidoka Swing Band, with members who were internees as well as others who have no ties to the camps (check out the video, they’re talented!).

Speaking of the internment, this weekend was the 3rd annual New York Peace Film Festival which featured some works dealing with this topic.  I attended the event’s kick-off party on Friday night where some of the filmmakers spoke.  There we had a chance to preview the second part of a movie called “Twice Bombed, Twice Survived,” which depicts those who lived through the bombings in both Hiroshima and Nagasaki.  The last known double survivor, Tsutomu Yamaguchi, passed away this January at age 93.  However, Hidetaka Inazuka, a producer of the film who was in attendance, said in his comments that another one had emerged just two weeks earlier.  This 91-year old man will finally be able to verbalize the horrors he experienced over six decades ago.  “Twice Bombed, Twice Survived” detailed how due to survivor’s guilt as well as stigma against these double survivors, many have been reluctant to come forth or even discuss their experiences with their families. Also appearing at the kick-off as a guest speaker was Charles Pellegrino, author of the controversial book Last Train to Hiroshima which featured Yamaguchi.  The allegations against him of falsifying information cannot be proved as the source in question has already passed away, but Pellegrino asserted that he only wrote what he had been told.  Director James Cameron bought the film rights to the story, and when asked if Cameron has any plans to do a movie based on the topic Pellegrino responded by saying, “He’s a busy man and Avatar 2 looks like a very likely possibility, but when the time is right I know he is still interested.”  Cameron was able to meet with Yamaguchi before he passed away, and the double survivor’s dying wish was for Cameron to share what happened in Hiroshima and Nagasaki with the world.